The DLF was founded in 2007 after the largest douc population ever found was discovered by the DLF at Son Tra Nature Reserve near Danang, Vietnam. The story goes like this. In late November, 2006 Danang Forest Protection Department asked the DLF to complete a critical survey at Son Tra Nature Reserve to substantiate whether doucs had become extinct as had been reported by a local scientist. In Vietnam environmental laws prohibit development in reserves and national parks where endangered species exist. The reported extinction of the doucs at Son Tra opened the reserve to intense development and enormous profits for the local government. However because the Forest Protection Department questioned whether the doucs were really extinct, they called the DLF and asked us to do a final survey of Son Tra Nature Reserve. We used a technique called direct observation. Using this technique, our team actually observed and counted the largest population of red shanked doucs ever discovered at a single site. We found 300 individuals in12 groups– a number believed to represent at present approximately 40% of all the red shanked doucs in Vietnam. 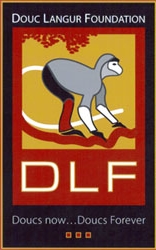